To strengthen our hospitalization/discharge support system, the Patient Support Center came into full operation in April 2018. The center integrates 5 functions of the hospital: community health partnerships, patient consultation, home care consultation, hospitalization support, and preoperative examination support.
The Department of Hospitalization Support, performing one of these functions, helps patients and their families prepare for hospitalization by visualizing processes from inpatient treatment to returning to the original medical institution after discharge and the initiation of home care.
It also assesses care-related risks (such as falls, pressure ulcers, cognitive function, nutrition, medication, pain, and anxiety) from the perspective of post-discharge life, screens for factors influencing discharge support, and provides surgery orientations.
The center is charged with the task of providing safe medical services by promoting the sharing of information needed for spitalization/discharge support and cooperative work among multiple professionals from the early stages through collaboration with medical departments, the Cancer Care Promotion Center, and other divisions of the hospital. As a base for comprehensive patient support from hospitalization, discharge, and home care to returning to work/school, it also aims to promote patients’ satisfaction and liaison with ommunity-based medical institutions.

Medical cooperation is one of the aims of agreement on academic exchange between Scientific Center of Reconstructive and Restorative Surgery, Siberian Branch, Russian Academy of Medical Sciences and Faculty of Medical Sciences, University of Fukui, concluded in August, 2013. Upon the agreement, many Russian patients have visited to take medical treatments at our hospital. There were patients underwent surgical treatment in Departments of Otorhinolaryngology-Head/Neck Surgery and Neurosurgery in the past. A robotic surgery so-called “da Vinci surgery” was first applied to an overseas patient in Department of Urology in this February. The patient recovered quickly and was good in health after one week admission. He visited the President Mayumi at University of Fukui and discussed to develop the relationship among universities in the both countries, Japan and Russia. Moreover, he admired the excellence of hospitality, advanced medical techniques and cooperation of all the staffs working at the hospital. Our hospital is contributing for international medical cooperation including acceptance of overseas patients. 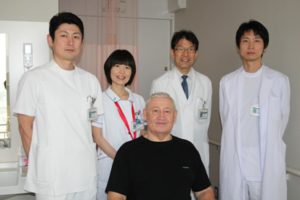 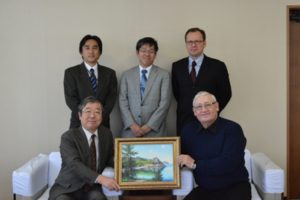 Initiation of clinical practice on a new hospital ward ( September 16, 2014 )

On September 16, 2014, a new ward of University of Fukui Hospital started to operate as a project in the first stage of the hospital’s redevelopment. The establishment of the new ward, part of the redevelopment of the hospital, was realized through its basic philosophy: “High-quality medical center that nurtures skilled community health care professionals”. Clinical practice implemented on the new ward not only focuses on advanced acute care, but it also emphasizes seamless health care, involving inpatient through to home health care, to respond to changes of the times and social needs while taking advantage of the characteristics of the hospital. The amenity area on the first floor is used as a triage space in the event of a disaster, and oxygen supply and inhalation equipment has been installed on the walls. In the Department of Emergency, the system for emergency medical services, modeled after the emergency care system adopted in ERs in North America, has been significantly enhanced. The passage for emergency medical transportation directly leads to the decontamination room, and the wide emergency treatment room is equipped with CT devices. There are intraoperative CT devices and a hybrid operating room on the floor for the Department of Surgery, which is larger than almost any other operating room in Japan. As the Department of Surgery is positioned close to the ICU, patients can be promptly transferred to the unit following surgery. Furthermore, each hospital ward has a “center for the functions of specific organs and disorders”, which few hospitals in Japan have, to provide seamless health care, including diagnosis, hospitalization, treatment, and discharge. The number of private patient rooms is 151, which is significantly more than the 75 on the existing hospital ward. There are lounges on each floor and benches along the hallways for patients to feel relaxed. Furthermore, the introduction of the new cook/chill system has allowed us to serve more delicious meals that are not too hot or cold in an appropriate manner. The above-mentioned facilities significantly improve the environment for patients’ recovery. On September 14, prior to the opening, 488 of the 600 beds on the existing ward and approximately 230 patients were transferred to the new ward. The comments of the patients include: “It’s as if I am staying in a hotel”, “It is large and beautiful”, and “I enjoyed meals in my new room”. As part of the second phase of the project, which will shortly be initiated, the existing ward will be remodeled and the functions of each department will be enhanced by 2018. 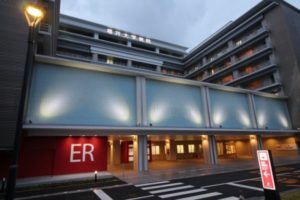 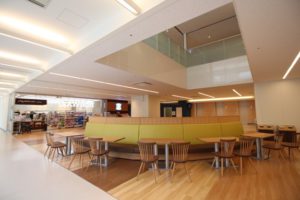 The operating rooms are larger than any other in Japan. OP1 has been equipped with intraoperative CT devices, and OP10 is a hybrid OR (operating room). We have also introduced the da Vinci surgical system, which has already been adopted by the Department of Surgery in some hospitals. The wood-finish room for patients to wait immediately prior to surgery helps them reduce their nervousness. The bright blue color used for the operating hall accentuates its cleanliness. The floor and walls of the large operating hall have been painted in multiple colors so that devices and instruments can be stored in an orderly manner. The positions of monitors and electric outlets on the walls, shadowless lights, and ceilings in the operating rooms have been decided according to the operative procedures. 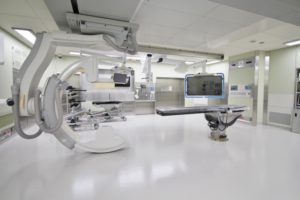 Introduction of “da Vinci Si”, a robot for assisting surgery, for the first time in Fukui Prefecture to provide safer treatment that reduces burdens ( December 1, 2013 )

In the autumn of 2013, University of Fukui Hospital introduced “da Vinci Si”, a robot for assisting surgery made in the U.S.A., for the first time in Fukui Prefecture, and the first surgery using the robot was conducted in the first week of December of the same year. In surgery using “da Vinci”, each of its four arms is inserted into small ports made in the abdominal area of a patient, and surgical instruments (forceps and electric surgical knives) attached to the tips of the arms are remotely controlled. An endoscope is attached to each arm, and surgeons manipulate the surgical instruments using a controller and foot pedal while watching a clear and enlarged 3D image of the surgical field on a monitor. The movements of surgical instruments are smooth and mimic those of the hands. Furthermore, the ranges of motion of those instruments are wide and they can be moved in a more complex way than the hands of a person, and, as a result, surgery can be conducted in a safer and more accurate manner. The robot system even allows surgeons to perform nerve-sparing surgery and suturation, which could not be conducted in conventional laparoscopic surgery, relatively easily. As its marked advantage, the burden on the body of a patient is reduced because surgery using the robot system requires no laparotomy and a much shorter period, and minimizes the amount of bleeding. 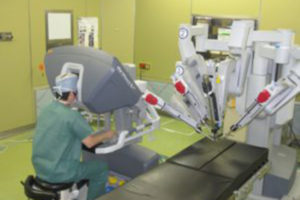 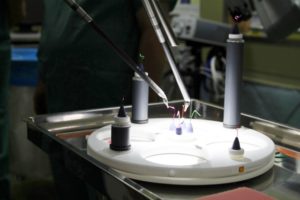